Academic Progression in Nursing (APIN) is a grant initiative of the Robert Wood Johnson Foundation in partnership with the Tri-Council and administered by the American Organization of Nurse Executives (AONE).  Nine state Action Coalitions, including the Massachusetts Action Coalition (MAAC), are working with their partners to accelerate implementation of promising practices that will help states achieve our goals of seamless academic progression and increasing the number of nurses with baccalaureate degrees to 80 percent by 2020. Developing innovative strategies with community colleges, universities, and practice partners will ensure that the nursing workforce is prepared to deliver high-quality patient care across all practice settings.

For more information on APIN, click on the PDF's to the right. For state and national APIN information, updates and publications, visit the page on the Campaign for Action website: Academic Progression in Nursing (APIN).

In 2012, Massachusetts received a grant from the Robert Wood Johnson Foundation to advance the work of increasing the percentage of the RN workforce who hold a BSN or above. As part of this initiative, the Department of Higher Education established the Nursing Education Transfer Compact (NETC) Working Group to create a seamless, cost effective, timely and transparent pathway for students to progress from community college Associate Degree in Nursing (ADN) programs to the Bachelor of Science in Nursing (BSN) degree at a state university or UMass. Their recommendations formed the Nursing Education Transfer Compact, which was approved by the Board of Higher Education in January 2014. After the one year implementation period of further refinement at the campus level, the following nursing education transfer policy was finalized in March 2015, with the expectation that full implementation should occur at all public institutions no later than Academic Year 2015-16:

Boston, Mass. -- Massachusetts higher education and health care leaders have been working on initiatives to advance and expand the nursing workforce, with the goal of raising the percentage of Registered Nurses with a BSN or higher from 55% to 66% by 2020. Achieving this goal is contingent upon many factors, such as classroom and laboratory facilities, clinical opportunities, and sufficient faculty capacity within nurse education programs.

Nursing schools nationwide report a shortage of faculty and an inability to hire additional faculty. Among the reasons reported are (a) insufficient funds to hire new faculty; (b) unwillingness of administration to commit to additional full-time positions; (c) inability to recruit qualified faculty because of competition for jobs with other marketplaces; (d) and qualified applicants for faculty positions are unavailable in their geographic area.

A team of nursing faculty and administrative leaders at several Massachusetts colleges and universities, public and private, has explored the complex challenges of faculty capacity in the MA Action Coalition Report on Nursing Faculty Workforce Challenges in Massachusetts. The group is one of several project teams convened by the Massachusetts Action Coalition (MAAC) leading work under a Robert Wood Johnson Foundation Academic Progression in Nursing grant. With the Massachusetts Department of Higher Education and the Organization of Nurse Leaders of MA & RI as co-leaders, the MAAC is engaging health care providers, nurse educators, and public sector leaders to effect and support changes in how nurses are educated, trained, and practice in order to better serve the health care needs of the Commonwealth.

As it relates to the overall mission of the work, which is to address the need for sustainable, competent faculty to educate professional nurses, the goal for this initiative is to increase the faculty pool available to educate nurses from BSN through doctoral degrees. The strategies identified address challenges from both the recruitment and retention lens, as well as the retirement perspective.

Report: Employers Surveyed on Activities to Promote Advanced Education and Diversity in their Nursing Workforce

Boston, Mass. -- According to a recent study of Massachusetts health care employers, 90 percent of acute care hospitals have a formal goal to increase the proportion of nurses with bachelor’s degrees (BSN) in their workforce, but fewer than half require new hires or current nursing staff to achieve that level.

The 2013 survey of Massachusetts health care employers -- acute care and community hospitals, skilled nursing facilities, and visiting nurse associations – provides an overview of the various activities employers are undertaking to promote advanced education and diversity in their RN workforce. Massachusetts has set a goal of boosting the percentage of nurses with bachelor’s degrees (BSN) from 55% to 66% by 2020. Studies show that higher proportions of BSN-prepared nurses are associated with lower rates of medication errors and mortality. Research also shows that BSN-prepared nurses have stronger critical thinking skills and make better care decisions.

Nurses are the largest workforce in America and are playing a pivotal role in advancing health care and improving patient care nationwide and in the Commonwealth. That message was highlighted repeatedly at the recent Massachusetts Healthcare Workforce Summit, attended by approximately 150 nurse leaders, educators, nurses, and health care employers from around the state.

The October 2, 2014 event was organized by the Massachusetts Action Coalition (MAAC), a partnership of the MA Dept. of Higher Education and the Organization of Nurse Leaders of MA & RI, which is leading a statewide campaign to transform health care through nursing education and practice innovations.

BOSTON – July 31, 2014 - Massachusetts is one of nine states awarded a $300,000 grant from the Robert Wood Johnson Foundation (RWJF) to create a more highly educated, diverse nursing workforce. This is the second RWJF grant, part of its national Academic Progression in Nursing (APIN) initiative, to support Massachusetts' efforts to make it easier for current and future nurses to advance their education to the BSN or higher degree.

… During the two-year grant period, Massachusetts and the other states will develop sustainability plans to ensure that the work to promote seamless academic progression for nurses in their states will continue beyond the grant period. During Phase II, each state also will develop a robust diversity plan and focus on academic-practice partnerships to expand and support the work to date.

PRINCETON, NJ – July 28, 2014 -The Robert Wood Johnson Foundation (RWJF) today announced that nine states have been awarded $300,000 grants in Phase II of its Academic Progression in Nursing program (APIN). APIN is advancing state and regional strategies aimed at creating a more highly educated, diverse nursing workforce. It is run by the American Organization of Nurse Executives (AONE) on behalf of the Tri-Council for Nursing, consisting of the American Association of Colleges of Nursing, the National League for Nursing, American Nurses Association, and AONE, which is leading the four-year initiative. “Action Coalitions” in all nine states that were part of Phase I of the program have met or exceeded their benchmarks, and are receiving funding to continue their work for two additional years. Funding to the states over the four years will total $5.4 million.

The states receiving Phase II APIN grants are California, Hawaii, Massachusetts, Montana, New Mexico, New York, North Carolina, Texas, and Washington state. The grants will allow them to continue working with academic institutions and employers to expand their work to help nurses in their states get higher degrees, so they can be essential partners in providing care and promoting health, as well as more easily continue their education and fill faculty and primary care nurse practitioner roles. The Action Coalitions in all these states have been encouraging strong partnerships between community colleges and universities to make it easier for nurses to transition to higher degrees.

The toolkit includes a description of the 10 competencies and the value of each in context of curriculum/practice and features distinct learning activities for both settings with questions for reflection. Published in August 2010, the NOFNCC have gradually been integrated into nursing education programs and practice settings here in Massachusetts and in other states. Use of competencies serves as a foundation for all levels of academic progression. This highly-anticipated toolkit will enhance those efforts.

The Massachusetts Board of Higher Education (BHE) is taking steps to make it easier for nurses to pursue advanced degrees, with the goal of improving patient outcomes across the Commonwealth.

On January 28 the BHE endorsed a new Nursing Education Transfer Compact developed by the Massachusetts Action Coalition (MAAC), a partnership between the Organization of Nurse Leaders of Massachusetts and Rhode Island and the Massachusetts Department of Higher Education. The goals of the Compact are to provide a “seamless, cost effective, timely and transparent pathway” from community college nursing programs, where students earn Associate degrees in nursing (ADN), to state universities and UMass campuses, where they can earn Bachelor of Science degrees in Nursing (BSN).

Eligible students are those who have completed an ADN at a Massachusetts community college, passed the NCLEX-RN exam, and completed the requirements of the MassTransfer program, which allows students to transfer general education credits.

BOSTON – Tuesday, August 21, 2012 – Lieutenant Governor Timothy Murray today announced Massachusetts has received a $300,000 national grant from the Robert Wood Johnson Foundation to help current and future nurses seeking to advance their academic preparation within the nursing profession. This funding will enhance the Patrick-Murray Administration’s overall plan to support jobs, education and workforce development and helps to address the growing demands and challenges of the health care environment currently facing the country.

Massachusetts is one of nine states chosen to receive a $300,000 grant to support academic progression in nursing. The funds will support the Commonwealth’s efforts in partnership with the Organization of Nurse Leaders (ONL), to pursue effective strategies in nursing education. Currently, 55 percent of Massachusetts nurses hold Bachelor of Science in Nursing (BSN) or above. A 2010 report from the Institute of Medicine (IOM), recommended that 80 percent of nurses be educated at the BSN level or higher.

The Massachusetts Action Coalition (MAAC) was pleased to be a recipient of this prestigious award which recognizes the accomplishments of the Nursing and Allied Initiative and our nursing community since 2005. The MAAC application targeted 3 goals with strategies that will create accelerated pathways for nurses to achieve higher levels of education, promote the use of Nurse of the Future Nursing Core Competencies©, and address the faculty shortage issue.

The grant announcement was unveiled at a State House event on August 21, 2012.

Health care organizations, educational institutions and others are looking intently at the case for advancing nursing education as outlined in the Institute of Medicine (IOM) report The Future of Nursing: Leading Change, Advancing Health.  “The Nurse Education Imperative,” a guest editorial by Risa Lavizzo-Mourey in the March 2012 issue of Nursing Outlook, outlines the growing need for nurses educated at the Bachelor of Science in Nursing level and beyond and describes the benefits to health care organizations of supporting education progression.

To read the IOM report and learn more about efforts to implement its recommendations, visit www.thefutureofnursing.org

For background information regarding the Institute of Medicine’s "The Future of Nursing: Leading Change, Advancing Health." the MA Action Coalition, and details of the APIN grant, please see this

The MA Action Coalition is providing leadership to improve outcomes and transform the health care system for residents of the Commonwealth. 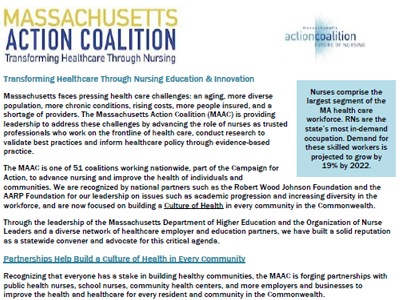