Many programs at the community colleges, state universities and University of Massachusetts campuses have received recognition across the state and nation for their excellence. Learn about a few of them by scrolling down, or downloading our most recent brochure.

UMass Amherst ranks among the nation’s Top 30 public universities; worldwide it places 115th among 500 leading research universities, according to U.S. News & World Report. Its Agricultural Sciences program ranks 8th in the world, while Space Sciences ranks 32nd. It is one of the world’s Top 100 universities for Chemistry (2014 QS World University Rankings) and the School of Computer Science’s Artificial Intelligence specialty is No. 12 in the U.S. News’ national graduate education rankings.

UMass Lowell’s Francis College of Engineering ranks in the top five engineering schools in the state. With an emphasis on hands-on learning, classroom instruction is bolstered by industrial co-ops and internships, research opportunities, and a National Science Foundation-funded initiative for Service Learning.

Quinsigamond’s Early Childhood Education program, which includes practical experience at a fully operational, on-site preschool, was the first in the state to earn the Massachusetts Department of Early Education and Care’s highest quality rating. Graduates have a 100% job placement rate, often being recruited prior to graduation.

Middlesex’s phlebotomy certificate program received the 2014 Best of Phlebotomy Education Award from PhlebotomyTrainingSpot.com, which recognizes the top phlebotomy programs across the U.S. based on ratings, program reputation and accreditations.

Holyoke Community College’s associate of arts in music is the only two-year program in Massachusetts with NASM (National Association of Schools of Music) accreditation, and one of only two in New England.

UMass Dartmouth ranks #4 in Online College Database’s list of “U.S. Colleges Where Art Programs Abound,” and its College of Visual and Performing Arts (CVPA) is one of only four public higher education institutions in Massachusetts to be accredited by the National Association of Schools of Art and Design.

The laboratory sciences degree program at Northern Essex is “Platinum” endorsed by the Massachusetts Life Sciences Education Consortium. Students in the program can choose from three areas of concentration: biotechnology, environmental sciences, and chemical analysis.

Worcester State offers, in conjunction with UMass Medical School, a concentration in Nuclear Medicine Technology (NMT). NMT is a study of diagnostic and therapeutic techniques developed in hospitals, particularly in radiology, pathology and internal medicine departments. The program had a 100 percent board exam passing rate in 2013.

Request brochures for your school > 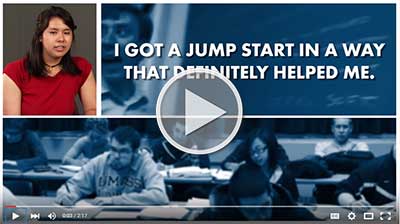