October 2017— Growing out of the Redesigning Student Aid in New England Project, sponsored by the New England Board of Higher Education and funded by The Lumina Foundation, Massachusetts was selected as one of three states to receive financial and technical support to conduct a holistic review of current program offerings. This study provides a comprehensive review of the Massachusetts state financial aid system and how it compares to other states, in addition to identifying opportunities to improve, consolidate, and simplify the system to the benefit of students and families. Such reforms would move the Commonwealth forward on three BHE priorities: decreasing students’ time to earning a postsecondary degree, closing achievement gaps, and improving college access and affordability.

Breaking down silos to put students on the path to success: The promise of early college in Massachusetts

January 2017— Today’s state leadership and the broader education community in Massachusetts are committed to the idea that increasing postsecondary success is critical to both the future prospects of young people and the long-term prosperity of the state. Yet the structure of the education system means the shared goal of postsecondary success is typically pursued in silos. This report calls attention to the opportunity for Massachusetts to break down these silos by embracing one particular strategy for postsecondary success: to expand high-quality early college high schools across the state, by inviting educators from both K-12 and higher education to come forward with jointly designed school models.

>> Breaking down silos to put students on the path to success: The promise of early college in Massachusetts

October 2016—Commissioned by the Massachusetts Department of Higher Education (DHE), this report has two objectives: to identify the current landscape of access and success programs in the Commonwealth of Massachusetts, and to explore the views that local stakeholders of access and success programs hold regarding the challenges facing underrepresented groups, especially Black and Latino male students. 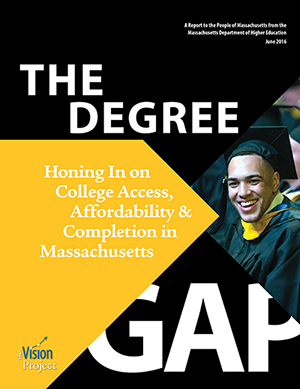 June 2016—The Department’s annual Vision Project report suggests that employers who are already having difficulty meeting current workforce needs in high-demand fields will face even greater challenges in the next few years, as the state’s high school population continues to decline at the same time that an estimated 660,000 college-educated workers plan to retire. The demographic challenges facing the state mean that public colleges and universities are likely to fall short of meeting the need for new associate and bachelor’s degrees by 55,000 to 65,000. The Degree Gap predicts that 80% of those “missing” degrees needed to fill the state’s talent pool in the next decade will be at the baccalaureate level or higher.

June 2016—This report encompasses more than a series of recommendations related to campus safety and violence prevention, with a focus on active shooter and sexual violence risks. By building off of prior studies, work done across the campuses, national best practices, and emerging research, its overall theme is to focus on practical, fair, and transparent ways to protect our campus communities, especially the Commonwealth’s 29 public institutions, from an array of harms.

April 2016—The Vision Project Performance Incentive Fund (VP-PIF) is an annual, competitive seed grant program designed to advance the Vision Project goals of national leadership in key educational outcome areas by launching and/or scaling effective strategies and collaborative partnerships among the Commonwealth’s public higher education campuses. This report to the legislature outlines the impact of these grants and details the history of PIF funding since its start in 2012.

Massachusetts' Future, Our Mission: A Report to the Legislature

January 2016—The STEM Starter Academy is intended to support community colleges' efforts to inform, engage, recruit, retain and graduate significantly more students and enhance their success in STEM programs leading to job placements or 4-year transfers. The UMass Donahue Institute presents findings from their evaluation of the initiative in this Year 2 report.

For more reports and publications, visit the Policy & Report Library.