Research shows that the best way to determine what college students know and can do is to examine their learning outcomes from multiple viewpoints. Massachusetts is part of a national effort to develop student learning assessment tools that capture the complexity of college learning better than a single standardized test, and allows for comparisons between public campuses in the state and similiar institutions in other states. Though the work is challenging, being able to assess and compare student learning will improve teaching and help campuses not only identify problem areas but understand how to solve them.

The Massachusetts Department of Higher Education leads and participates in a number of efforts to advance student learning assessment.

We participate in the VALUE Institute, a multi-state program of assessment that utilizes authentic student artifacts, which are assessed with AAC&U rubrics.

In June 2011, on the recommendation of the Vision Project Working Group on Student Learning Outcomes and Assessment (

Phase II Report ), former Commissioner Richard Freeland directed the Massachusetts Board of Higher Education (BHE) to begin planning to apply for LEAP State status from the Association of American Colleges and Universities (AAC&U). Former Commissioner Freeland assembled an Advisory Group of Presidents who worked with him on the application, including a proposal for a signature initiative to develop an assessment system that met following criteria:

AAC&U accepted Massachusetts and its proposed LEAP State initiative, which then proceeded on two tracks: the state level and the national level. A

Timeline of Massachusetts' Work on Learning Outcomes Assessment also details the milestones of these early efforts.

Work officially began in June 2012 to develop (1) a Massachusetts model for learning outcomes assessment that meets the above criteria and (2) a plan to pilot the model beginning January 2013. This work, bringing together 22 public campuses with the Department of Higher Education, was overseen by the Massachusetts Task Force on Statewide Assessment and executed by the 11-member Massachusetts Team with input from the State Partner Team. 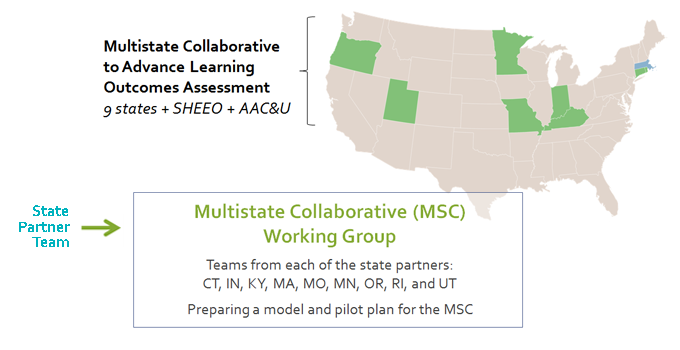 Beginning in March 2012, Massachusetts, SHEEO, and AAC&U discussed with other states the proposal for a Multistate Collaborative to Advance Learning Outcomes Assessment (MSC), and in December 2012 eight other states joined the partnership: Connecticut, Indiana, Kentucky, Minnesota, Missouri, Oregon, Rhode Island, and Utah. Each state appointed members to the MSC as a whole and to an MSC Working Group, which then began the work of developing (1) a multistate model for learning outcomes assessment that meets the above criteria and (2) a plan to pilot the model in 2014.

Continuing to Advance the Culture of Assessment

Continuing to Advance the Culture of Assessment in Massachusetts

The State of DHE Assessment

Managing Assessment on your Campus