Released on January 25, 2017, the Governor’s $40.5 billion budget for state government includes a $10.3 million increase for the Commonwealth’s 29 public campuses. 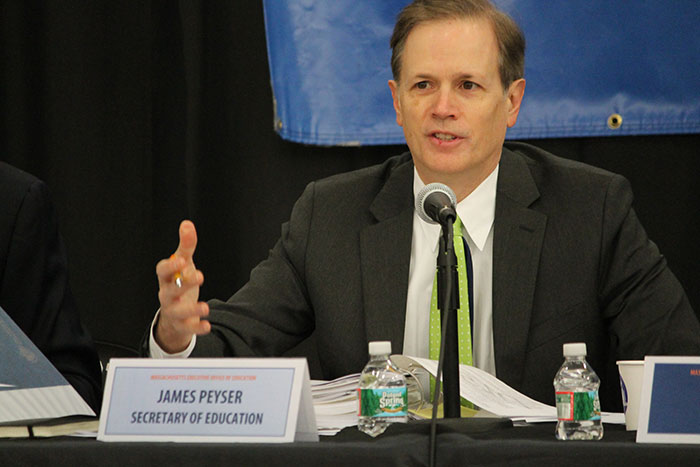 This week Governor Charlie Baker and Lt. Governor Karyn Polito introduced their House 1 budget, including a 1 percent increase ($10.3M) in campus appropriations for UMass, State Universities, and Community Colleges, in addition to the state’s share of increases in GIC health care costs for state-supported higher education personnel. To put this increase in context, it may be helpful to understand that the overall FY18 budget is based on projected tax revenue growth of 3.9 percent, with much of that incremental revenue going to cover increased costs at MassHealth (which accounts for 40 percent of the state budget), additional local aid spending, required pension contributions, and renewed deposits into the Stabilization Fund. Other noteworthy higher education proposals in House 1 include the consolidation of several DHE line items into a “STEM Starter Academy and College & Career Pathways” account (with an additional $1 million for early college and dual enrollment programs) and an outside section to evaluate the feasibility of implementing tuition retention at State Universities and Community Colleges.

More broadly, the administration proposes to build on its previous investments in public education through a $91.4 million increase in Chapter 70 school aid (including at least a $20 per pupil increase for all 322 school districts and new support for rising health insurance costs) and a $7 million rate increase for center-based early education providers to maintain quality and support staff retention. Other noteworthy education initiatives include $2 million for practice-based principal training and teacher residencies, plus additional funding to double the number of paid STEM internships for high school students. A new cross-agency initiative called “Learn to Earn” will develop and expand public-private partnerships to help unemployed and under-employed adults gain the skills and credentials they need to fill job vacancies in high-demand occupations and industries.

Investing in Our Schools